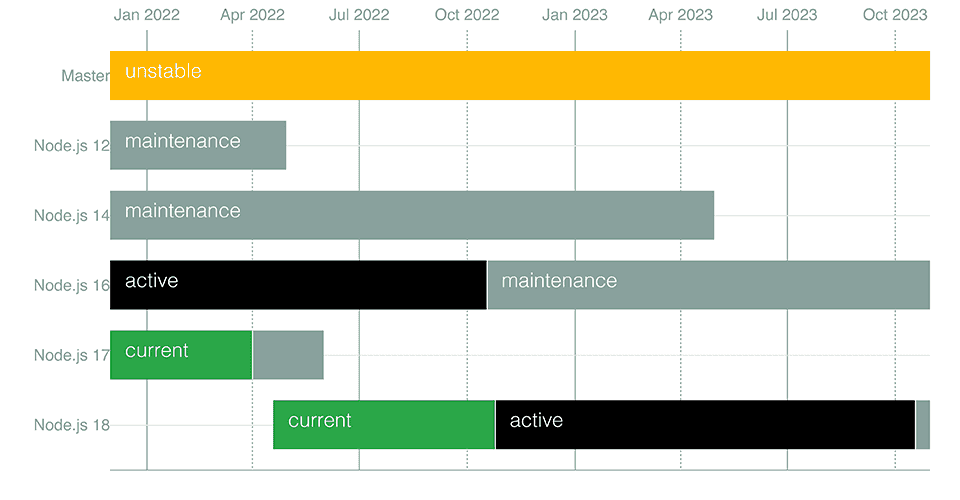 One of the new features getting a lot of attention is the new fetch API. Fetch has been around for awhile in the browser, and has been module you could add into your Node.js project by running npm install node-fetch. There have been complaints that the two are not completely interoperable.

fetch() has shipped in Node and now people are complaining that it does not work like node-fetch 🤦‍♂️. However, EVERYBODY said they wanted more standard-compliant APIs from Node.js.

The Fetch API provides a simple promise based API for making client based HTTP requests. Previously you had to use the XMLHttpRequest API to make HTTP requests which required multiple lines of code to be written to make a request. Now with the Fetch API a HTTP request can be made as simply as the following example:

While there have been many popular options for unit testing your code in Node.js, Node has never had a built in test runner. Node v18 now includes a node:test module. The example below shows how to set up test and assertions.

You can read more about the new test running in the docs here https://nodejs.org/dist/latest-v18.x/docs/api/test.html.

The new Web Streams API is now exposed globally in the global scope. While streams have been a part of the Node.js API from the very beginning, this API is shared between both the browser and Node.js, though this is considered an experimental feature in Node.

Web Streams support both ReadableStream and WriteableStream readers, writers and controllers. These can be used in combination with the new fetch API.

There are three notable changes to V8 10.1. One of those additions are new array methods for finding the last element and index of an array:

Another improvement in V8 has been internationalization support. With the addition of the Intl.Locale and the Intl.supportedValuesOf functions you can now retrieve calendar, currency, numbering as well as timeZone data about a location as seen in this example:

The V8 engine has also made strides in improving the performance of class fields and private class methods. The data format of the v8.serialize function has changed, and it will not be backwards compatible with earlier versions of Node.js.

Linux versions of Node are now built on Red Hat Enterprise Linux and are compatible with glibc 2.28 or later. Prebuilt binaries for macOS will not require macOS 10.15 (Catalina) or later. The minimum supported architecture for AIX is now Power 8.

Prebuilt binaries for 32-bit Windows are not available at this time because of a V8 update, but may be restored if 32-bit support is added back to V8.

Version 18 of Node.js is packed with some neat features, and more should be coming prior to the LTS release. As the V8 runtime is upgraded with new features, Node gets these features with the new version of V8. I am looking forward to the LTS release in October as I am sure other Node developers will be.